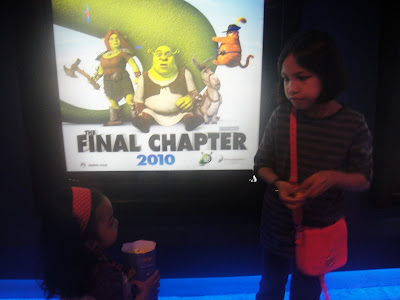 We recently watched shrek forever after

Here is the synopsis...

The quiet, normal life no longer suits Shrek(Mike Myers), who secretly longs to go back to the way things were, when being an ogre meant he was feared. Unfortunately, when he vents those feelings to his wife, Fiona(Cameron Diaz), “the way things were” means before he saved her from captivity in the first film. Following the squabble with his wife, Shrek comes upon Rumpelstiltskin(Walt Dohrn), who is the Far Far Away version of a predator lender: You make a deal that’s way too expensive for you and way too good for him. In return for spending one day as the ogre he used to be, Shrek gives up a day from his childhood, a day he doesn’t remember.

Unbeknownst to Shrek, Rumpelstiltskin picks the day Shrek was born as the exchange because it helps him cash in another sweet deal; on the day Shrek rescued Princess Fiona, the King of Far Far Away was about to sign away his entire kingdom to rescue his daughter. The story then becomes a save-the-day mission, quite literally: Shrek has to break his contract before the day he was born is completely gone or he won’t ever exist. That means recruiting Donkey(Eddie Murphy) and Puss in Boots(Antonio Banderas).

Most review says it is just ok ok not superb but my kids was laughing away...me n hubby too! They enjoy ever since first shrek movie!
BitS by BitS from JeM at 6:57 PM

We went to watch it last Saturday..yess it was fun and interesting even for my kids who are much smaller compared to yours:))
but of course the distractions still there but at least this kind of movie where there were other kids around, when my kids talked slightly loud I wasn't bothered much compared to when we watched Iron Man the other day:))

most bloggers kata mmg non stop gelak, so i'm sure it's good kan? definitely going to watch it as i'm a fan of shrek. heh!!