Amsyar at the age of 8, just realized that he enjoys playing beyblade with his cousins recently.

Beyblade is a brand name for a line of spinning top toys originally developed and manufactured by Takara Tomy, first released in 2000. The toys include a 'launcher' - a device for bringing the spinning top up to speed, with either a separate or integral rip-cord. This 'ripping' action causes the tops to be ejected, at the end of the movement. Players eject the tops into a plastic arena, with a slightly dished base, where they subsequently strike each other. The last top still spinning wins.*googled*
Beyblade toy line went on to be one of the most popular toy lines in the world from 2000 to 2005.

Guess with whom he plays with? Not other than his big sister!! Batrisyia lah yang jadi mangsa kena main dgn dia. So far he got 2 beyblade, and soon i think he will beg me to buy all sorts of parts that can upgrade the 'spinning' action! 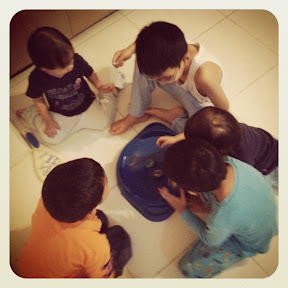 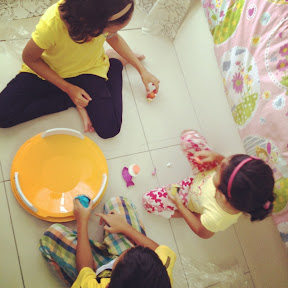 Trying to persuade his sister to play beyblade. That yellow plastic base where u can launch the beyblade cost me almost Rm100. Phewww! and the beyblade price range the cheapest from rm29.90 i guess and can go up to rm59.90 each!

- Posted using BlogPress from my iPhone

Really superb and amazing to look. I always love to play with my beyblade top that I recently collected from at PIJ. I enjoy this very much with my younger's. Now I want to collect this great one from there.
http://bit.ly/beyblade-top